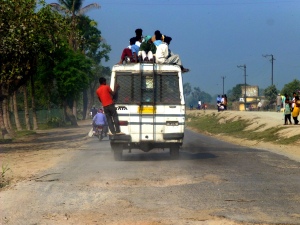 “The best leaders… almost without exception and at every level, are master users of stories and symbols”

I have just arrived back today from travelling in Africa so my blog is late this month…..

We often hear business leaders and politicians trying to communicate messages unsuccessfully. Why?

Are they using too many words, the wrong words or just words? Communication is not just verbal. It is estimated that over 65% of all communication is non-verbal. Eye contact, facial expressions, appearance and gestures influence how you interpret the message.

This is where the use of symbols become important in communicating. This can be used in the workplace.

Recently I was confronted with trying to express the importance and urgency of cultural change to an organisation that was underperforming. Presenting to the Board I realised that the use of symbols or visual imagery would help communicate the issues and how to manage the change.

The visual imagery I decided to use was taken directly out of Jim Collins’ management book, “From Good to Great – why some companies make the leap and others don’t” (http://www.jimcollins.com/article_topics/articles/good-to-great.html)

I used the symbol of a bus. The symbolism was very easy to understand and is very clear.

From a PowerPoint slide showing a red bus presented to the Board, the concept developed to using a model of a toy bus. The bus had the company’s logos on the side, and on the roof was an arrow pointing forwards indicating progress and moving ahead with the Jim Collin’s quote:

The toy bus sat on the meeting room table for all to see. Later we added Lego people getting on and off the bus – normal people getting on, and pirates, wizards and clowns getting off the bus. The toy bus was regularly referred to when explaining a person’s performance or suitability and became a clear way of communicating.

It became a powerful visual symbol. When management spoke about what needed to happen it was described in terms of being on the bus. It was a clear message and was understood from the managing director to the staff on the shop floor.

We implemented daily ‘toolbox’ meetings with staff. We called the location ‘the bus stop’ further reinforcing the message.

Using symbols in business as a tool is a very important part of communicating, both with your current and prospective customers and staff. If the symbol is compelling enough it will become part of the organisation’s culture.

Can you think of a symbol used by an organisation that is easily recognisable and understood?

What about your organisation?Communicate using symbols