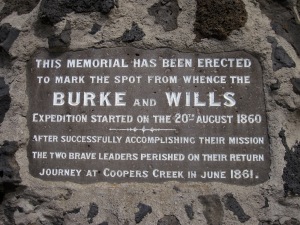 So who were Burke and Wills?

“No expedition has ever started under such favourable circumstances at this”.

Yesterday over 160 years ago, watched by 15,000 cheering people, 19 men, 26 camels, 23 horses and six wagons loaded with 20 tonnes of supplies, including 80 pairs of boots, a cedar-topped oak desk with matching chairs, a bath, rockets, a Chinese gong and six tonnes of firewood, left Royal Park in Melbourne heading north. It was the first expedition in Australia to use camels for transport. This was the start of the famous Burke and Wills expedition. Sponsored by the Royal Society of Victoria the expedition was attempting to be the first to cross Australia, from south to north and return. By the second day at Essendon, only eight kilometres from Melbourne, three of the six wagons had broken down.

It was the best equipped expedition in Australia’s history, sponsored by a Victorian Government, flush with the wealth from the Gold Rush, and the Royal Society of Victoria. It was led by an Irish-born police officer, Robert O’Hara Burke.  Initially the second in command was George Landells, but he left the expedition less than two months later following disputes with Burke, so, William John Wills replaced him. The first night, Burke rode back to Melbourne to see Julia Matthews perform at the Princess Theatre as he was infatuated with her. It is alleged that Burke’s main motivation for leading the expedition was to win Julia’s heart and her mother’s approval. It took the expedition two months to reach Menindee in western New South Wales, even though it took a mail coach just over a week to make the same journey.

Burke, following a questionable army career where alleged gambling debts meant he had to resign his commission, joined the Irish Constabulary. When dissatisfied there, he boarded a ship for Australia. With the Gold Rush in full swing and the resulting chaos, and a shortage of police he managed to secure a position as a Police Inspector. He gained a reputation as an eccentric, a gambler, a risk-taker, and a strict disciplinarian with a “talent” for getting himself lost. Through connections and lobbying Burke somehow got himself appointed as the leader of the expedition. Burke had no knowledge or experience in managing an expedition and had never travelled in the Australian Outback. Wills in contrast, was a surveyor and scientist and was considered by his friends as dependable, rational and intelligent.

By June 1861 over eight months later, nine of the original 19 men had died, including Burke and Wills. When it became apparent that the expedition was in trouble, four separate expeditions went into the Australian interior and not one person lost their life.

So, what went wrong?

It was obviously a well-equipped expedition, backed by a government and a Royal Society.

By the time the expedition reached Cooper’s Creek in central Australia, the outer limit explored by Europeans it was early summer. The sensible action would have been to wait until after summer when the severe desert heat had subsided. However, Burke decided to make for northern Australia with three other men to beat a rival expedition from South Australia, led by John McDouall Stuart. Burke instructed a party to wait behind for three months. In the searing summer heat, the expedition walked up to 30 kilometres a day until they reached the north coast of Australia. By then, the animals and men were exhausted. Instead of spending time recuperating they headed back, not before letting some of the camels go which could have been used as food.

On the return journey, the men became exhausted and began to run out of food. One of the men, Gray died, and they began to eat the remaining camels. By the time they reached the Cooper’s Creek depot over 4 months later, the depot party, who were starting to suffer from scurvy had already left, ironically in the early morning of the day they arrived.  Malnourished and exhausted they were too weak to catch the depot party heading south. The survivors’ meagre supplies soon ran out and despite trading their fishing gear for some fish, they failed to befriend or observe how the local the local aboriginals were able to hunt and gather food. Burke had little respect for the local people and in one incident fired over the heads of some aboriginals who tried to offer them food. Just over two months after arriving at the depot, both Burke and Wills died of starvation. Only King survived. He was taken in by the local Aboriginals.

What management lessons are there for managers in the failure of the Burke and Wills expedition?

Here are three lessons I think we can learn from Burke and Wills.

If you are interested in learning more about the expedition, I recommend the following book:

3 thoughts on “So who were Burke and Wills?”