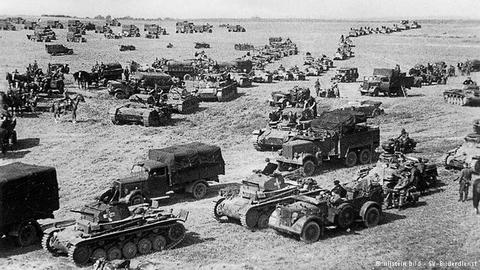 “You can’t outrun the future if you don’t see it coming. Individuals who get startled by the future weren’t paying attention”.

Blitzkrieg roughly translated from German means “lightening war” and was a method of warfare used by Nazi Germany in successfully invading northern Europe in World War II (1). At the beginning of World War II, France had the largest army in Europe, and the most tanks and aircraft but was defeated comprehensibly by the Nazi war machine in a matter of weeks in 1940. To be successful, Nazi German did not fight France on their terms or in more traditional ways, instead they used ‘blitzkrieg’.

So how did the Germans successfully invade France in World War II?

Following World War I, the French built a series of defensive forts on their eastern frontier with Germany called the Maginot Line, to protect them against invasion.  Although outnumbered, the Germans used a combination of tanks, motorised infantry and aircraft in a combined offensive mobile approach using excellent radio communications. They bypassed the Maginot line and attacked France through the Ardennes which the French considered ‘tank proof’.

By comparison, the French relied on static forts and viewed tanks as a defensive weapon to support their infantry. Also, few of the heavy tanks had radios and furthermore they were unreliable.

What are the lessons from blitzkrieg that can be used in business?

In summary it was ‘old war’ v ‘new war’ and broke the ‘old thinking’.

The German approach meant challenging the traditional ways by doing things differently which required planning to get around a superior enemy, without fighting on the enemy’s terms, and by using:

There are many examples of companies who failed to change which resulted in their demise. For example, although Kodak invented the digital camera it failed to commercialise it. Nokia the leading mobile phone business at the time invented the smart phone, however its delay in commercialising it meant the company was overtaken by Apple and Samsung. I had a client whose business relied for the majority of its revenue on providing engineering services to a major vehicle manufacturer in Australia. The owner proudly told me that he could always rely on this company as he had dealt with them for over 30 years. Within 2 years of this statement, vehicle manufacturing ceased and his business folded.

As business owners and managers, we must always be thinking of new ways of doing things, embracing new technologies and seeking outside assistance where appropriate ……….

Here are three questions you can ask yourself:

This is your challenge!

After all, ignoring emerging trends or becoming overly absorbed in the present is naïve or even reckless.

3 thoughts on “Blitzkrieg – lessons for managers?”